The need to reduce dependency on fossil fuels led to the consideration of renewable energy power plants such as the Solar Thermal Power Plants (STPP). These materialize a Brayton, Rankine or combined cycle and substitute in part (or even in total) the fuel thermal energy with solar thermal energy.

In order to predict the behavior of these plants and consequently estimate their economic aspects, accurate performance models are mandatory. There are available tools to perform this task but either lack the necessary fidelity or are limited to simulate certain types of plants or unequally weight the power production and solar parts. Therefore, the Laboratory of Thermal Turbomachines at the National Technical University of Athens (LTT-NTUA) developed the SOLAR library in PROOSIS which equally weights the power production and solar parts at the desired level of fidelity. The SOLAR library uses ports from other libraries (e.g. TURBO) and thus can be used in cooperation with these libraries to model and simulate STPPs. The following figure shows the component palette of SOLAR library. 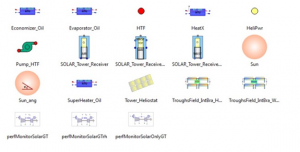 The SOLAR library contains the following components: heat transfer fluid and water heat exchangers, air and water tower receivers, Sun, troughs, heliostat field and performance monitors. Ports are used to transfer the properties of the Heat Transfer Fluid and the solar thermal power. Heat exchangers are modeled with the NTU method and are accounting for sensible and latent heat transfer. The Sun component permits the calculation of the solar beams vector by computing zenith and azimuth angles for every desired hour. Furthermore, if no irradiation data is available, the Sun component is able to estimate the irradiation amount for the desired location using a clear sky model.

Trough component can simulate the heating of the working fluid and the resulting pressure loss with parabolic mirrors equipped with vacuumed receiver. The working fluid can be either oil or water. In the case of water, appropriate equations are used for the two-phase flow in order to simulate the Direct Steam Generation operation. The simulation is performed by dividing the trough’s length in user defined parts and performing a heat balance accounting for losses (cosine, conduction, convection and radiation) and efficiency factors (optical and absorptivity). This heat balance permits the determination of the temperature of each receiver’s layer and therefore the computation of the working fluid outlet thermodynamic state.

The Heliostat component permits the calculation of the reflected solar power to the tower receiver taking into account sun–mirror and the mirror–receiver vectors (which are computed for every mirror in the field) and cosine, reflectance, shading–blocking and attenuation efficiencies. Furthermore, if no heliostat field is available, there is the ability to determine each mirror’s coordinates in order to minimize shading and blocking. Tower receiver components assume a pressurized volumetric receiver which is modeled as a black body and compute the outlet pressure and temperature of the working fluid. The working fluid (air or water) outlet thermodynamic state is computed with a heat balance taking into account the reflected beams from the heliostat field, the absorptivity and optical efficiencies and radiation losses. Also, there is the ability to select a limit for the outlet temperature by appropriately reducing the used solar power and thus simulating mirror defocusing.

An example of a solar-only Rankine cycle and a solar hybrid gas turbine modeled in PROOSIS with the aid of SOLAR library can be seen in the next two figures. 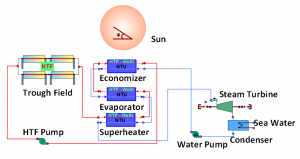 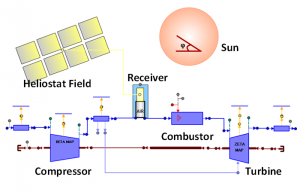 As an example for the solar-hybrid gas turbine case, a fuel-only design point is chosen and real atmospheric data is used to examine its performance. Sun beams are reflected by the heliostat field to the receiver which heats the air before its entrance in the combustion chamber. The scenario of operation is to keep the TIT constant. If no irradiation is available, the engine operates as fuel-only. If the amount of irradiation is adequate to heat the air to the desired TIT there is solar-only operation with zero fuel consumption. Any other amount of irradiation will result to a hybrid mode for which the desired TIT is achieved by the solar heating and the burning of fuel. The following picture shows the fuel consumption and the irradiation during a day. 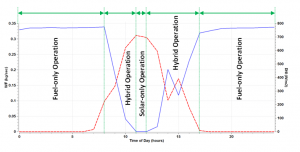