Included in the standard installation of EcosimPro-PROOSIS

The MECHANICAL library, supplied with the professional version of EcosimPro, contains components to model 1-dimensional translational and rotational mechanical systems. The library has been designed to run fast stiffness simulations, even with coupled friction elements. On the other hand, because directional forces are not contemplated, the force of gravity on masses is not taken into account whereas inertial forces are.

Using drag & drop methodology, the user can quickly create a diagram of the mechanical system to be analysed, the representation of which is very similar to the physical system.

Thanks to EcosimPro’s features, the MECHANICAL library is very easy to configure and extend, adding any components and characteristics as needed. This can be done graphically through a simple, user friendly interface, or through EcosimPro’s object-orientated language which makes it possible to re-use existing codes.

Applying the object-oriented methodology, a group of components can be encapsulated into a single subsystem used like a black box, with a defined number of inputs and outputs. This enables modular design of the overall system and makes it possible to share tasks among different specialised users or merely simplify the system.

One of the library’s biggest advantages is the possibility of its use in the multidisciplinary facet of EcosimPro. This means that we can design, for example, the power stage of a motor coupled to a transmission system and, at the same time, study the dynamic response of each of its elements and the effect that mechanical changes (for example, changing gear) have on the electronic components. In this way we obtain an overall study of the system, minimizing possible problems during commissioning.

The library is composed of two types of components, namely:

In summary, different component groups will be established and included in the MECHANICAL library with several representative examples: 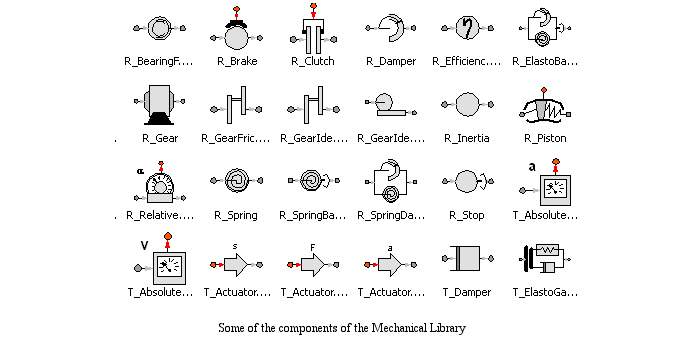