Included in the standard installation of EcosimPro-PROOSIS

The THERMAL library, supplied with the professional version of EcosimPro, contains components to predict temperature distributions and heat flows in systems and devices using the thermal network method (the lumped parameter method or the resistance/capacity method).
A thermal system with complex geometries can be replaced by a series of heat capacities and conductors (one-dimensional heat transfer) if a very detailed temperature distribution within the system is not required.

One of the library’s biggest advantages is the possibility of conjunction with other EcosimPro libraries. Either steady-state or transient analyses can be handled with this library. The heat transfer modes that can be considered in the thermal model are conduction, radiation and natural convection. Material properties such as specific heat or conductivity may also vary with temperature.

Schematic of a thermal mesh model of a hydrazine thruster: 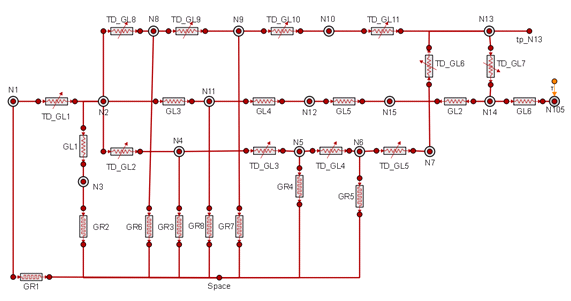 Components
Depending on whether temperature or heat flow is calculated, most of the components of this library can be classified as:

In this way, the construction of thermal networks through this library complies with the following basic rule: components having ports of the types described above (C and R) must be connected to each other in an alternating arrangement represented by the string C-R-C-R-C. 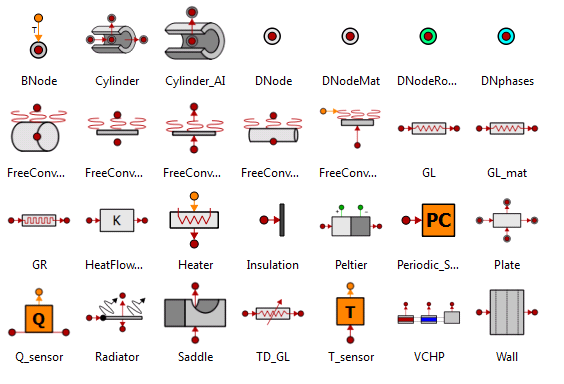 Finally, another important aspect of this library is the calculation of thermal properties based on the interpolation in external data contained in files which are provided. This enables the user to add his own files of properties. Properties for a group of materials (aluminium, carbon, carbon steel, cooper, etc) are also available.

Heat conduction through a wall

This is a simple example of a model of heat conduction through a wall formed by three layers of different materials exposed to a radiative environment. Its representation in EcosimPro is illustrated in the following diagram:

After the corresponding component was generated, an "exp1" experiment was run to simulate the system thermal evolution for 2000 seconds for an ambient temperature of 1000 degrees centigrade when the internal wall surface is considered to be adiabatic. 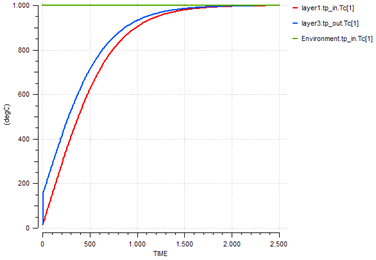