OPC (OLE for Process Control) is a communications standard developed jointly by large industrial groups of industrial software, instrumentation and control via the OPC Foundation consortium.

Thanks to its client-server architecture based on Microsoft’s OLE, COM and DCOM technologies, OPC lets different hardware and software be connected easily and without “fighting” with each device driver.

The final aim of OPC is to build systems with servers (usually data-generating hardware) and clients (software to control and monitor the data generated).

EcosimPro uses the standard OPC in its simulations by means of a new software tool called “OPC Toolbox” that integrates in the normal environment as a new plug-in. The main features of this new tool are:

On each screen of the wizard, the user can set up general characteristics of the simulation, such as: public variables, initializations, simulation times, type of execution vs time (real time), etc. 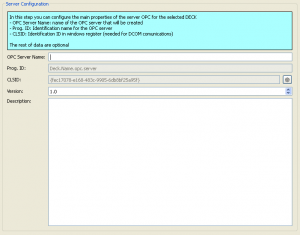 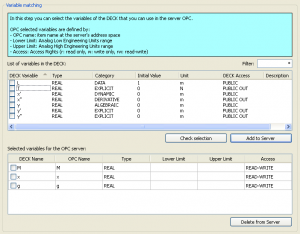 Wizard to generate an OPC sever based on a DECK

The end result of the process is a new OPC server capable of running a simulation autonomously and independently from the EcosimPro environment.

Steps for generating an OPC server based on a DECK

On each screen in the wizard, the user can: configure which servers to connect, which variables to communicate, what types of communication to send, etc. 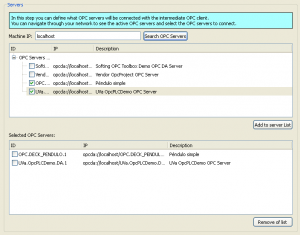 Wizard to generate an OPC client that connects two servers

The end result is an OPC client that can exchange data between two servers.

With its new “OPC toolbox” plug-in, EcosimPro’s capabilities for use in simulations are myriad, with it being the platform on which are based products such as: