EcosimPro and CRYOLIB are being used to develop a dynamic model of the cryodistribution system that refrigerates the superconducting coil system of ITER Tokamak.

The ITER cryoplant, which will be the largest cryogenic system in the world with an installed cooling power of 64 kW at 4.5K, is responsible for the operation of the Tokamak superconducting coil system, including the Central Solenoid (CS), 18 Toroidal Field coils (TF), the Toroidal Field structure (TF-ST), 6 Poloidal Field coils (PF) and a set of correction coils (CC) that magnetically confine, shape and control the plasma inside the vacuum vessel.

The model of the ITER cryoplant has been previously modeled in EcosimPro using its professional library CRYOLIB. It contains the three helium refrigerators. However, the current model does not include the superconducting coil system, which has to be included for the tool to be able simulate the operation of the complete ITER cryogenic system to guarantee cooling and stable operation of ITER magnets. 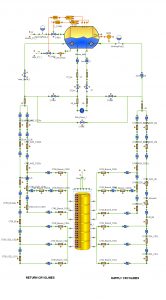 The superconducting coil system is formed by 4 cryodistribution systems: CS, TF, TF-ST and PF/CC. Each one includes a dedicated auxiliary cold box that provides the coolant to the coil modules, a circulation pump, two heat exchangers immersed in the reservoir, cryolines, feeders and control valves for flow regulations in addition to the model of the coil cooling circuits, based on cable-in-conduit conductors. The models should be able to reproduce the magnets dynamics taking as an input the helium flow conditions provided by the cryoplant and a heat load scenario. Two aspects need to be taken into account:

• Assessing the energy removed from the magnet system in order to determine the heat load to the cryoplant so that it can keep constant the temperature of the helium supplied despite a heavily pulsating heat load.

An important challenge in the simulation of these systems is the big size of the models generated due to its complexity. The CS alone contains 240 parallel cooling channels, discretised each one in the direction of the flow in order to represent with the necessary level of detail the heat load distribution. To satisfy the computational needs of this kind of models a new version of EcosimPro for 64 bits has been developed in parallel. The new version that will be released in December allows the simulation tool to handle the amount of information generated by models of huge size and makes the most of the computer resources available.

The EcosimPro model will allow control engineers to analyse and optimize the control of the cryoplant under different operating modes:

In addition, it will also allow the investigation on heat load mitigation techniques for each one of the systems.