A study of the emergency status of a power plant due to a serial fault in one of its sections is provided. An analysis of the fault effect, its detection and means to tackle it has been included. This requires a transient and simultaneous simulation of the three unbalanced phases of the system, using EcosimPro and ELECTRIC-SYSTEMS library.

The startup section of the plant is connected to the off-site network at 138 kV by means of the three-winding startup transformer with Ydy connection. This transformer feeds the motors of the plant cooling pumps at 6.9 kV. These have been simulated by means of static RL loads with values that depend on the situation to be replicated: startup or normal operation.

The purpose is to analyse the behaviour of the currents and voltages in the various busbars and in each phase whenever a serial fault occurs in the phase located upstream from the startup transformer. The behaviour is determined by the configuration of the various system neutrals: (1) The primary unit of the transformer in star connection has an earthed neutral. (2) The secondary unit, in delta connection, has no neutral. (3) The neutral of the load with a star connection to the above secondary unit is assumed to be earthed. (4) The secondary unit with star connection has earth insulation (floating), and (5) the motor neutral is not accessible (floating), so the following model is obtained:

The figure shows the 132 and 6.9 kV busbars, the neutral connections in accordance with the above criteria, the serial fault that is programmed in phase A of the 132 kV busbars and the static load that simulates the motor. Once the components were configured with estimated values for this type of facility taken from the available documentation, the corresponding simulations were performed. The starting point was normal operation, and a serial fault was started at instant 0.2. The following results were obtained for the currents and voltages in the 132 kV and 6.9 kV busbars:

The serial fault interrupts the current in the startup transformer primary unit through the non-operational phase. However, the direct earthing allows the other two phases to preserve their original configuration with a peak of around 100 A. However, the type of transformer that is used causes the lead of one of the phases and the lag of the other, so the shift between them is reduced to only 60° instead of the usual 120°.

On the other hand, the insulated neutrals of the secondary unit and the motors, together with the intermediate winding in delta connection, makes the voltage phase unbalance hard to detect because the two operational phases tend to become balanced with the third one when the potential of the neutral oscillates. Unbalances smaller than 10% of the peak value could be encountered, as shown in the figure. In addition, there is an important voltage drop from the nominal values due to the impedance used for the modelling of the network itself and the losses in the transformer. 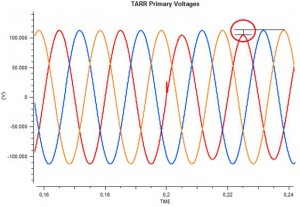 Finally, considering all of the above, the on-load currents have no significant imbalances either, so the fault that occurs upstream is hard to detect at this level of the facility.

Subsequently, a more detailed model was developed. This model included the main and auxiliary network and the startup network, as well as the dynamic models of the induction motor for the pumps and synchronous unit for the generators. The results with this more detailed model confirmed the difficulty of detecting this type of fault, which had already been shown in the previous, more simplified model. 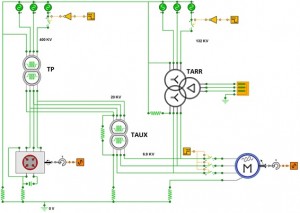