Version 1.2.4 of the CRYOLIB toolkit includes many upgrades from v1.1. Chief among these is the optimisation of the fluid property calculation functions, which has substantially improved calculation times. In addition, the new version supports 64-bit compilers. This improves the information handling capabilities, which is especially useful for large models.

v1.2.4 of the toolkit includes new components, such as for ‘tube’ components (fluid paths with no associated walls), that allow the connection of CRYOLIB to the standard THERMAL library, and modifications to some of the existing ones for the same purpose. The library can therefore be used to exploit the capabilities of the THERMAL library for thermal analysis. For instance, it will be possible to connect the new ‘tube’ components to the ‘cylinder’ component of the THERMAL library to analyse the effect of conductivity in both radial and axial directions. A further example is the plate heat exchangers. Users may now select between calculating the losses to the atmosphere based on user-defined design data, as has been the case up to now, or calculating them in more detail using components of the THERMAL library to model the shell and its exchange with the atmosphere. 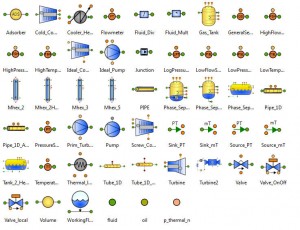 Other new elements include the possibility of defining the configuration of the valves as a function of the valve Cv or of its specific geometry (orifice area and pressure drop coefficient) depending on the users’ preferences. Furthermore, the law for the valve opening has been modified to improve accuracy for small valve openings.

New functions have also been introduced in the calculation of the friction factor because of the elbows on the pipes. The possibility for the user to include additional pressure drops has also been added. The debugging of the library has also continued thanks to the feedback received from the users.

Two new models of coolers have been added and documented in the Toolkit example library: a He cooler at 80K and another one of LN2. This will allow new users to rely on a larger collection of examples so they can become familiar with the library and its multiple capabilities.