The University of Valladolid has developed a library on micro-sources of renewable energies in EcosimPro that can be integrated to form low voltage microgrids that can supply electrical power to remote areas that the main or national grid cannot reach on account of the typology or weather.

Generally, the generators and microsources that make up a microgrid are renewable/non-conventional distributed energy resource (DER) systems. In this library, the microsources are represented by photovoltaic sets and a wind turbine, and they are equipped with power electronic interfaces (DC/AC or AC/DC/AC) and a local controller to regulate production levels of active and reactive power. In addition, the library contains a number of different elements of power electronics as needed to control the facilities, as well as diesel motors and generators, sources of wind or sunlight, pumps, tanks, etc. that are found in those facilities. 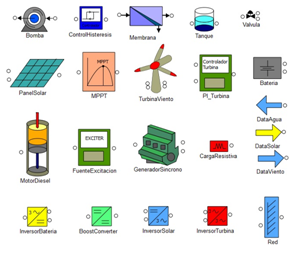 The model of the photovoltaic set is based on an equivalent circuit from a solar cell depicted by a source of current in parallel with a diode. It includes the effects of changes in temperature and levels of sunlight, as well as considering the specification sheets. The component was made to be general, so that it can be used in other simulation projects considering the technical specifications of the solar panels but without having to modify the existing component.

A model was run on a conventional, three-blade, variable-speed wind turbine equipped with a permanent magnet generator. The control strategy basically consists of controllers that work in different operating areas. The first controller is active when the wind speed is below the rated speed, and its aim is to maximize the output power by adjusting the speed of the rotor. Other control systems activate when the wind speed rises above the rated speed, and their purpose is to limit the power generated by the wind turbine by varying the speed of the rotor and the angle of tilt. A number of different control strategies were used to improve the quality of the power output.

The system was modeled modularly so as to determine the dynamic response of a wind turbine even after modification of the mechanical structure, the electronic configuration, or the control strategy. For example, the permanent magnet generator may be replaced with a dual-power induction generator joined to a multiplier. However, changes in the mechanical structure and the electronic configuration may also require changes in the control strategy.

The figures below show two examples of simulation: the first consists of a microgrid made up of a wind turbine and some solar panels powering a resistive load, and the second itemizes the electronics associated with the simulation of a wind turbine. 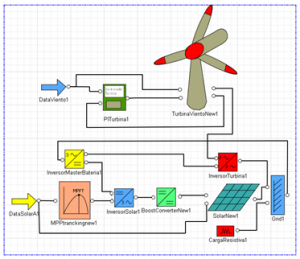 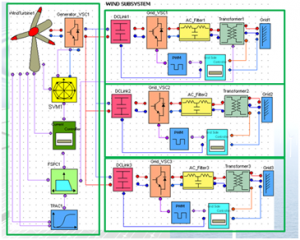 Electric model of the turbine in EcosimPro

The renewable energy library facilitates the training of technicians and engineers in how to operate microgrids, how to check different configurations and control strategies before implementing them, how to facilitate their design. It is also easy to integrate new components into the library.