The new library is closely related to the ELECTRICAL library already included in EcosimPro and has been specially designed for joint use with the CONTROL library and with another new library, still being developed, for renewable energy.

The figure below shows the Electric Machines library palette of over 80 components: 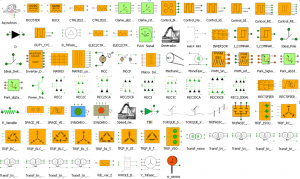 The new library, apart from allowing the inclusion of electrical systems in other EcosimPro models, offers the possibility of carrying out simulations of generation systems, responses of drive systems, supply and consumption control, etc.

The use of object orientated programming and the possibilities provided by the EcosimPro simulation monitor constitute a very suitable environment for developing electrical models in a simple and intuitive way. By joint modelling with the CONTROL and ELECTRICAL libraries, the user can analyze, for example, the current control on an induction motor (see figure below). The asynchronous three-phase motor is powered by means of an active inverter controlled under current. This is achieved using Relays from the CONTROL library which maintain the current consumed by the motor around a reference value and commutes the poles of the inverter when said current reaches the limits of the hysteresis band. Thus, as can be seen in the graphs below, the machine accelerates up to its stationary speed without the consumption current peaking during startup as would happen if no control were imposed on the system. 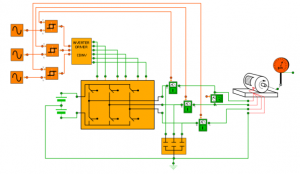 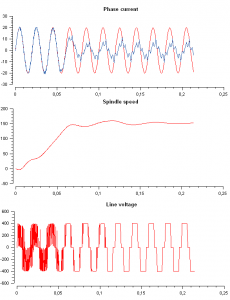 It also allows the implementation of complex control algorithms that take into account different variables of the model in order to take the right decisions at each instant. The library includes control techniques such as Space Vector modulation and PWM for different types of converters. The figure below shows this technique being applied to a 3×3 AC/AC conversion matrix. This control technique allows the generation of an output voltage whose value is easily controlled, and in addition the consumed current can also be controlled, and therefore so can the power of the system. To do this, two rotating vectors are generated in the Park space. One of them is the voltage reference, while the other is the current reference. Once they have been generated, their rotations are followed and the status of the conversion matrix is decided, as is its application time as a function of the position of both vectors at each instant on the basis of a high frequency carrier signal. 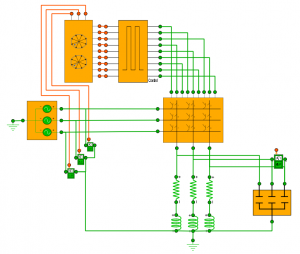 Model of a conversion matrix