The European Space Propulsion System Simulation (ESPSS) libraries are an initiative of the European Space Agency (ESA) whose purpose is the creation of a European platform for the simulation of the propulsion systems of spacecraft and shuttles. These libraries have been significantly updated and improved since their official first version in March 2008; not only have their capabilities been constantly increased but they have also been made more robust and reliable thanks to the experience gained over these years.

The latest update of the libraries, ESPSS Version 3.0, was issued recently and represents an important milestone in the development of this simulation platform, as several options of great interest to users have been added that allow the modelling of systems more in accordance to their needs. Some of these new capabilities are described below: 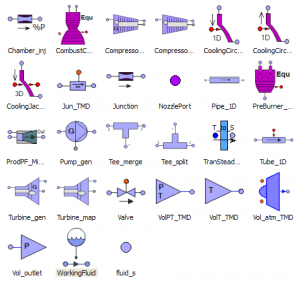 The design models impose the design conditions as input data, based on which the components, such as the turbines and valves, are sized. Typical design conditions include: efficiencies, velocities, pressure drops in the turbines, pressure and mixture ratio in the combustor, pressure surges in valves, etc. This library also allows the user to completely size a motor if the requirements of a specific mission are imposed.

The analysis models of actuations (off-design) mainly impose the geometry and the nominal operating conditions of the motor, and in general use the actuation maps of the turbines in order to calculate the off-design solutions.

Despite the fact that these two models (design and off-design) require different input data, both can be simulated from the same schematic by making use of the design partition. EcosimPro’s capacity to do this can transform data into unknown variables, and allows the design conditions to be added as new boundary conditions.

In addition, the STEADY_EXAMPLES library contains as set of application examples that can be used by users to familiarize themselves with the use of the steady library, and as a standard for the construction of more complex models. 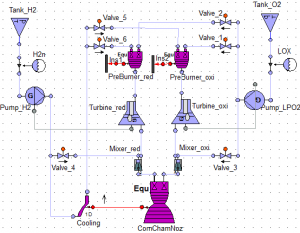 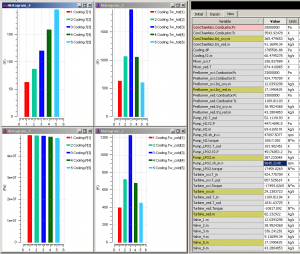 The solid/hybrid combustor component represents a non adiabatic combustion for combustion chambers for solid propellants, and allow the injection of a liquid oxidant. The range of fuels can be selected from a list of predefined fuels or it may be entered by the user via is composition and formation enthalpy.

The ramjet/scramjet component represents a non adiabatic combustion for motors that take in air from the atmosphere, with sub-sonic or super-sonic combustion respectively. Influences like, for example, friction, geometry or fuel injection at any point of the chamber may be simulated.

These new libraries have been developed to cover the simulation needs in two important areas of space propulsion: the EP library allows transient simulation of electrical propulsion systems, while the SATELLITE library is used to simulate the behaviour of the components of a satellite and of their evolution and control (orbital transfers, orbit control, effects of the sun and moon, etc). 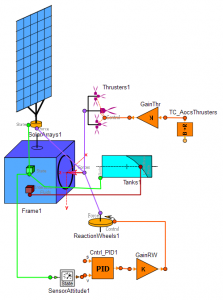 Apart from the above novelties, much work has been done on updating the existing libraries, with a view to maintaining a process of continuous improvement and correction of errors: the initialization of state variables has been improved and simplified; the effects of absorption/desorption has been added for piping and tanks and for the transport of non-condensable gases; and Van der Waals property functions have been added for working fluids.

Most ESPSS components now have a new parameter called burnerGasesOption to choose if they work with a pure fluid or with a mixture of gases. Also, the combustors have new parameters to choose the model for the vaporization of the liquid propellant (GasLiqOption), the model for balance or delay in the reaction of the fuel (rateOption), and whether to take into account or not the quantity of liquid in the mixture that exits the chamber (liquidExitAllowed).

The new Version 3.0 of the ESPSS libraries is without doubt the most robust and complex to date, and it can be described as a tool that is ready for use with real industrial applications. Current and future developments aim to extend the application of these libraries to as wide a range of real phenomena as possible in the field of space propulsion.