Hydrogen is an expensive utility used in several processes in oil refineries, mainly in desulphurization and hydrocracking plants, and which is gaining increasing importance in the global refinery economic balance. Within the framework of a project aimed at the optimal operation in real-time of the Petronor refinery H2 network, an EcosimPro library H2NET has been developed. The H2NET library comprises first-principles models of the main equipments and operations involved in the network management: gas streams, reactors, high-pressure separators, low-pressure separation processes, tanks, membranes, compressors, meters, valves, and mixers and splitters supporting also pipes with unknown direction for flow.

The network model built with the H2NET library has been used for different purposes. For What-If analysis in simulation; in a cooperative project with the Repsol Technology Center in Móstoles (Madrid) aiming at the revamping of the Petronor H2 network, where new connections and alternatives were considered and assessed; as case study for the formulation of real-time resource efficiency indicators REIs in the European project MORE; as well as for the network optimal operation in real-time. 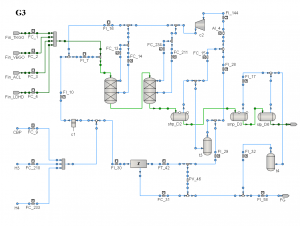 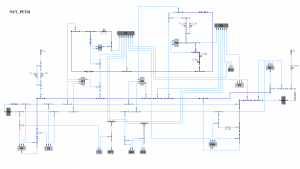 Regarding this last target of on-line decision support, firstly a data reconciliation problem is solved by optimization techniques, formulated as the minimization of the measurement-model deviations taking advantage of all the redundant flowmeters available; model parameters are calibrated at this stage and measured and unknown variables estimated. The optimal operation has been addressed with a real-time optimization RTO approach as the minimization of the H2 production cost based on the network model once calibrated in the data reconciliation stage, and including all process constraints and specifications. Reasonable results, ready to be implemented as decision-support for the operation, has been achieved and analysed regarding the production rates in producer plants, the make-up flow rates to consumer plants from the different headers, as well as the high-pressure purges and membranes flow rates. Snopt, based on a SQP algorithm, is used as NLP solver for both optimization problems.

The H2NET library includes several additional features: i) configuration structure to enable an easy link with the SCADA for process data acquisition; ii) functions to perform the corresponding data treatment and initialization of variables; iii) functions for the automatic generation of the code needed to implement both optimization problems; iv) management of the linear constraints to conveniently bound the search region in both optimization problems, exploiting model structure.

Financial support from the MICINN and the cooperation and involment of the Petronor-Repsol group are gratefully acknowledged.