Empresarios Agrupados has just released version 6.0 of EcosimPro/PROOSIS, a tool specialising in the simulation of dynamic systems in the fields of space, aeronautics and energy.

This new version 6.0 is a very important milestone in the new generation of simulation tools requested by the market. The product of years of work, it creates a 0D-1D simulation environment that covers the most demanding requirements of users from front-running companies in the Space, Aeronautics and Energy sector at the international level as well as some of the most relevant Research Centers worldwide and some of the best universities in Spain and abroad.

The new version extends its integration capabilities to cover every international standard, such as OPC UA and FMI in order to be able to import and export models between different environments (e.g. scadas, PLCs, etc.). Likewise, version 6.0 has a new co-simulation tool that lets several simulations run in parallel and on multiple machines, controlling all the results from the graphic interface of EcosimPro/PROOSIS in an intuitive way. In addition, improvements have been added to handle highly complex models and run the simulation faster thanks to new algorithms to speed up the calculations. This turns EcosimPro/PROOSIS not only into a 0D-1D simulation platform, but also into an integration platform for complex simulations.

The goal is to make that market need possible in terms of creating Digital Twins by making it simpler. The models can be exported in various formats for monitoring complex systems (an engine, a power plant, an airplane’s environmental control system, etc.) and detecting malfunctions, system prognoses, etc.

What’s more, for the first time, it includes a 3D viewer to make it easier to design simulation scenes in 3 dimensions connected to the variables of the model in real time. This helps users make more realistic simulations of certain scenarios such as orbital calculation, robotics, thermal control, etc. The tool has a scene generator that lets the modeler create his own scenario by adding three-dimensional shapes, 3D objects and photographs connected with mathematical variables. During simulation, these 3D models make it possible to intuitively visualize the evolution in space, for example, of a satellite with respect to solar radiation. 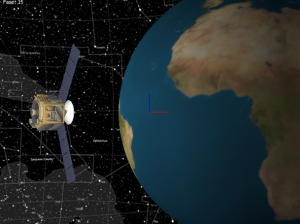 The core of the tool has also been improved by adding support for the international standard UTF-8 to represent character strings. From this version of the tool on, users can write comments, string values and file names in any language.

New algebraic-differential equation solvers have been optimized for real time and new sentences have been included to run blocks of equations in parallel and to generate post-process files in the international standard HDF5. All of these new features have improved the capabilities of the mathematical nucleus, turning EcosimPro/PROOSIS into a high-capacity calculation tool, even in real time.

Another major feature worth mentioning is the user interface, which has been enhanced so that users can edit simulation models on multiple screens simultaneously, thereby substantially increasing the usability of the tool. 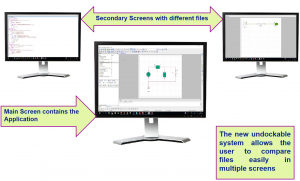 All current users with active maintenance contract will receive a notification in the following weeks to obtain the new version. If you have any question related to this new version please contact us at info@ecosimpro.com

The following is a list of just some of these improvements: