The modelling phase of the cooling circuits of the ITER magnets responsible for confining the plasma in the Tokamak has concluded.

The magnets are the main users of the ITER cryogenic system; for this reason, and to ensure correct operation of the system, it is essential to have models that are capable of reproducing the dynamic behaviour of the system in different scenarios. The simulation of the circuits that cool the magnets allows analysis of the load that this cooling represents for the plant, and provides a guarantee that the cables-in-conduit that comprise the coils are maintained below the critical temperature that if exceeded would lead to the loss of the super-conductive properties and cause the reactor to shut down.

The models developed with CRYOLIB library have also allowed us to analyze other scenarios, like the cooling of the magnets from an ambient temperature of 80 K. In this case, it is critical for the selected cooling strategy to guarantee a total system cooling time of less than 500 hours, while at the same time guaranteeing that there is no in-system temperature difference of more than 50 K, to prevent thermal stress in the structure.

Another scenario analyzed was the re-cooling of the magnets after a quench. In the event of a quench there is an increase in temperature and pressure in the magnet cooling system that forces the disconnection of the cooling via the auxiliary cold box, and the release of a certain quantity of coolant into the quench tanks to reduce the pressure in the circuits. The magnets then have to be immediately re-cooled directly from the cold box of the helium cooler before being reconnected to the supercritical helium circuit. The optimization of the time required to re-cool the system so it can become operational again is another especially important aspect.

The next step would be to model the remaining sub-systems with a view to obtaining a plant simulator that would provide the engineers with a tool for the design and optimization of plant control during the design and commissioning stage, and which could also be used for training operators. For this it is necessary to implement the models of the helium and nitrogen coolers, the lines that take the helium from the plants to the users and to other users such as the cryo-pumps, including the complex control systems that regulate the operation of the different users and the coolers. Given the complexity and size of the ITER plant, the integration of all the sub-systems into one model represents a challenge, due to the computational load on the simulation tools. It also means having to optimize the tool in order to be able to make the best use of the computer resources and maybe the need of using distributed simulation techniques to improve the simulation time of the model.

The complete model of the cryo-plant will allow optimization of the work in parallel of the coolers so that this will be more efficient. It will also provide a global view of the plant. Moreover, the future simulator can be put to other uses after the design phase, such as operator and engineer training for normal plant operation and failure situations. 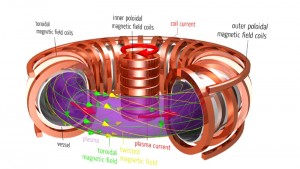