EA has started up their collaboration with Ciemat-Solar Platform of Almeria, well respected centers for research into thermosolar energy and thermal desalinization, to jointly develop the simulation of tower-and-mirror thermal solar power plants with molten salt thermal storage, and thermal desalinization systems (in this case, preferably by using solar energy for thermal energy).

The detailed simulation of electric thermosolar power plants with a central receiver – tower system (or for process heat) will include an array of heliostats, the receiver, the thermal storage, the power block and the eddy-current losses.

The simulation for thermal desalination will include the technologies for Multi-Effect Distillation (MED) and Multi-Stage Flash Distillation (MSF) with its different configurations, powered by solar energy in stand-alone mode and integrated into the Concentrated Solar Power (CSP) plants with parabolic trough or linear Fresnel technology (CSP-D mode). In addition, models of MED plants with thermal vapor compression (MED-TVC) will be implemented. 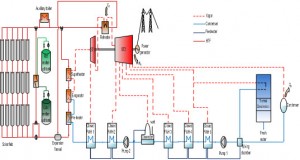