The ELECTRIC_SYSTEMS toolkit provides a series of components that allow the various electrical systems of the aircraft to be modelled for More Electric Aircraft projects, both for alternating current (AC) with constant or variable frequency and for DC current. To do this, purpose-built components for these applications have been developed, such as brushless and multistage machines for constant or variable high frequency, transformers/rectifiers, power converters, protection and control systems, etc.

ELECTRIC_SYSTEMS offers a whole set of electric, electronic and electromechanical components. Moreover, the most commonly used control algorithms are included in the library so that the user can concentrate on the areas of design and performance.

Using drag & drop methodology, the user can quickly create for study a wiring diagram whose representation is very similar to the physical system itself. The toolkit offers a wealth of possibilities, ranging from the simulation of power generation and distribution networks to transformer stations, power conversion, power electronics, typical control algorithms or digital electronic elements.

Thanks to EcosimPro/PROOSIS features, ELECTRIC_SYSTEMS is very easy to configure and extend and components and characteristics can be added as needed. This can be done graphically through a simple, user friendly interface, or using EcosimPro/PROOSIS object-oriented language which makes it possible to re-use existing codes.

Applying the object-oriented methodology, a group of components can be encapsulated into a single subsystem and used as a black box, with a defined number of inputs and outputs. This enables modular design of the overall system and makes it possible to share tasks among different specialized users or merely simplify the system.

The main features of ELECTRIC_SYSTEMS toolkit are listed below:

This user case shows the capabilities of EcosimPro/PROOSIS for the joint simulation of both the propulsion system and the electrical system of an aircraft.

The model simulates the following aspects:

The following figure depicts the schematics of the aircraft propulsion and electrical system: 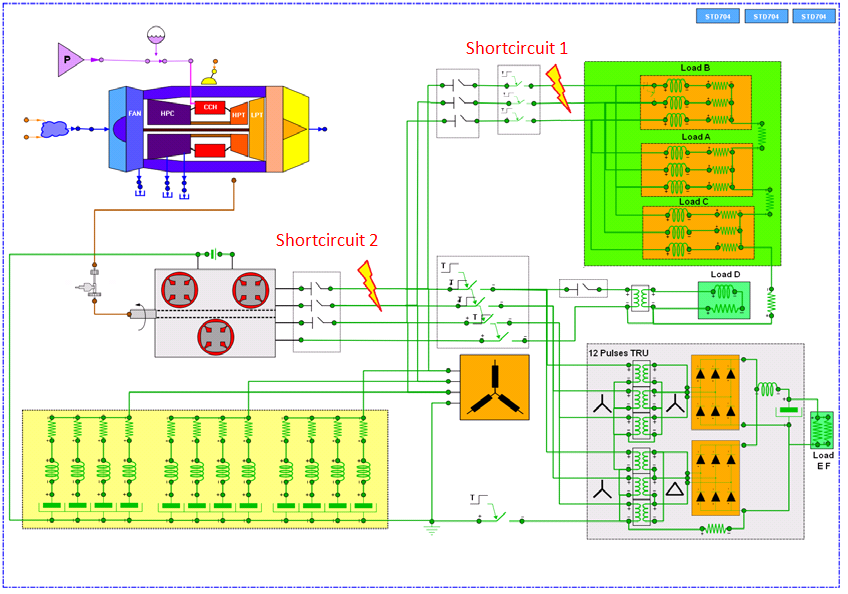 The 12 pulses TRU are modeled by means of Y/YD triphasic transformer and two passive rectifiers. 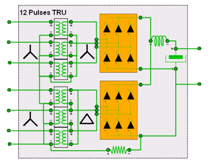 The voltage control maintains the main voltage within standard limits while the selectivity protection system allows the system to isolate the short circuit origin.

Phase Voltage during generator startup and under short circuits 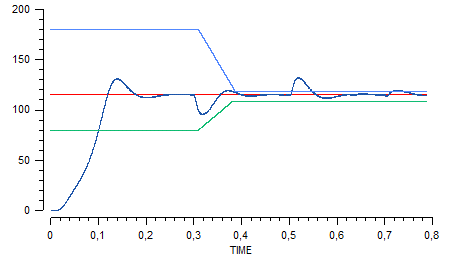 A, B and C loads phase currents 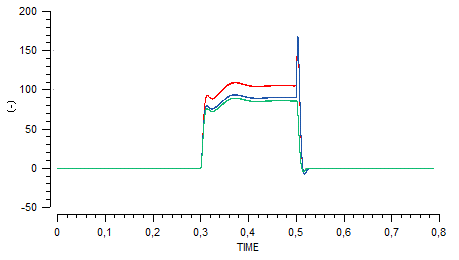 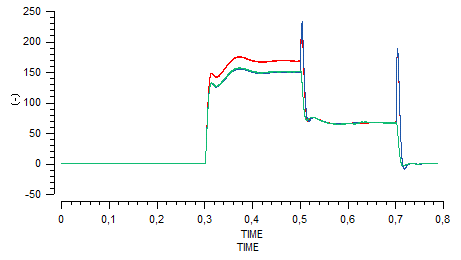 The startup/power generation electrical system of an aircraft is modelled. To do this, a synchronous unit with a brushless-type permanent magnet shall be used. The unit shall be powered from a distributed current source (batteries) until the assembly reaches enough speed for the main motor to reach the necessary compression to operate independently. On the other hand, once the main motors are in operation, they will be rotating the assembly. Under these circumstances, the operation of the unit shall be reversed, so that it starts operating as a generator to feed the electrical system of the aircraft.

The developed model focuses on the startup phase and its trapezoidal current control. The goal is to reach a speed of around 9000 rpm. To do this, the useful cycle required for the PWM control of the poles is established by experimentation. Modulation by pulse width provides added control: The position of the rotor establishes what transistors are active, while the PWM control makes the active transistor remain open for part of its activity and closed the rest of the time. This control may be applied in the top part of the inverter, the lower part or both. In the model that has been developed, it is applied only to the top part. Thus, the model of battery startup system with a synchronous unit with a permanent magnet developed in EcosimPro/PROOSIS with the ELECTRIC_SYSTEMS toolkit follows the figure set out below: 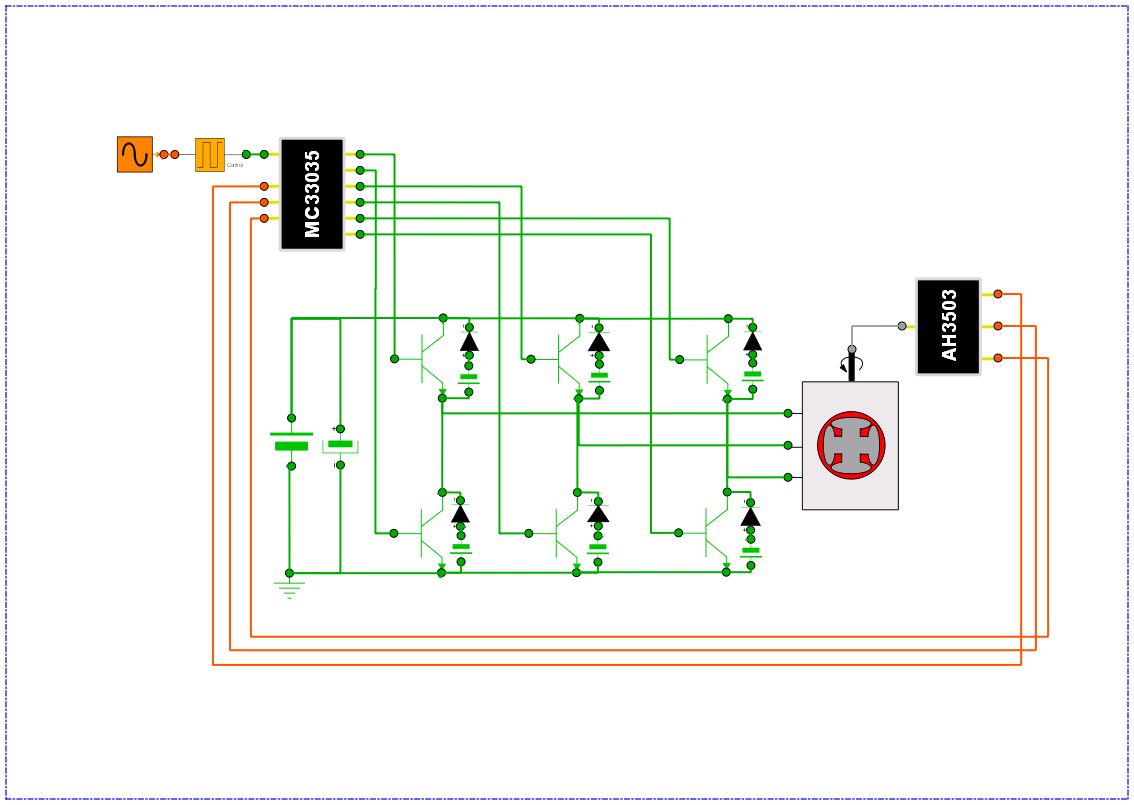 The inverter has been modelled by means of ideal transistors and diodes with a serial resistor and a given threshold voltage.

On the other hand, a Hall effect position sensor has been modelled to provide a digital 3-bit output of the rotor angular position. In addition, the trapezoidal controller applies the corresponding pulses to each pole of the inverter in accordance with the rotor position and to the corresponding PWM modulation.

Once the model has been described, the results obtained are analysed. Firstly, the evolution of the speed during startup is shown. It becomes stable at a steady state value of around 9000 rpm. The useful cycle allows the power produced by the engine, and therefore the steady state speed with a given load, to be modified. The value of 72% has been taken as definitive.

The following chart shows how the current is reduced as the unit accelerates and the induced generated voltage increase. Furthermore, the shape of the domes surrounded by flat areas of zero current coincides with the values expected with a trapezoidal control. It can be seen that each section is formed by six different sections that correspond to each of the six poles of the inverter.

The following detailed capture shows the PWM high-frequency switching and the six switching states of a complete cycle that correspond to the six poles of the inverter: 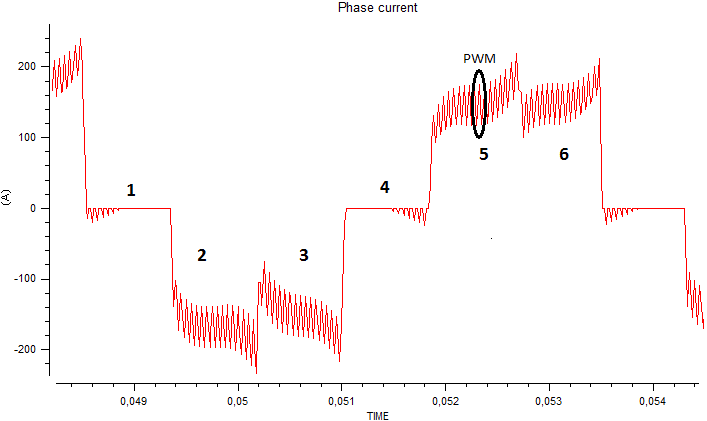 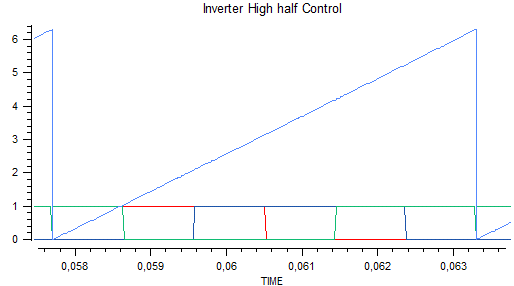 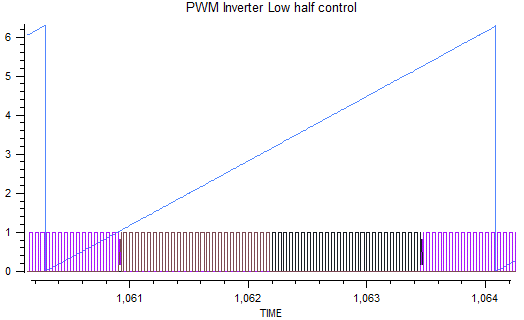 The influence of the mechanical load applied on the shaft is studied at a later stage. The simulation shows the reduction in speed and the increase in current consumption to generate the required traction capacity.

To improve our services, we use cookies (own and third parties authorized). If you keep visiting the website, we assume you accept their use. You can obtain further information, or check how to change your browser configuration, in our cookie policy.Accept